Cookies help us deliver our services. By using our services, you agree to our use of cookies.

Take Care and Make Your CoinMACAO at Santarcangelo Festival

Each one of us is intimately connected to finance.

We take it with us every day, carry it in the folds of our wallets.

Finance drops to the bottom of our handbags,

in the back pocket of our jeans,

or the inside of our jacket.

Our bank card, this piece of plastic that we keep as close as a talisman,

is our closest connection to finance.

Eva Neklyaeva, artistic director for the Santarcangelo Festival season 2017/2019, sitting at the Macao InfoPoint asks us to narrate what are the organisational redistributive forms that we are experimenting in: it is the first time that an Italian cultural institution is interested in these issues.

In this way, it starts a long collaboration apt to contaminate a festival of theatre and performative art begun in 1971, with some themes and reflections experimented in the so called movement of the “New Institutions of the Common”. The project opens with an inquiry by Macao directed to the workers of the Festival in order to understand its internal mechanics and economics, which is formalised by an installation of accessible and interactive data, the Open Love Point, in one of the Festival’s locations during the 2017 edition.

The question underlying this encounter could be synthesised as follows: can the economic environments currently being designed by cultural and political communities be translated within traditional model of cultural organisations - that is a board of directors, a selection of artists performed by an artistic director and a public present every year enough to verify the success of the entire operation?

The challenge is not trivial and neither it is the result. The most worthy element to bet on seems to be the cultural impact that a “performance” such this can produce. If it is true that utopia allows the emergence of new horizons to think and imagine how we want to live, it is also true that claiming utopia is something that has a lot to deal with art.

As an answer to ever more intensification of the precariousness of work and life, the community at Macao launches an internal experimentation of remuneration of the activities carried out at Macao through the implementation of a digital token named “Commoncoin”. Its design process begins two years before (Effimera Seminar, 21st and 22nd of June 2014) thanks to a collaboration of various researchers together with hackers from Dyne.org Foundation.

The main idea is to create a currency that enables its reproduction independently from capitalistic cycles of valorisation, able to go beyond the logic of waged labour and the promise economy, in order to trigger a process of collective re-signification of value. Its subsequent integration with a Basic Income shared within the Macao community is intended to “free time” and make more sustainable the development of various autonomous productive activities and with a higher investment exposure within the logic of the Commons.

The overall design is one of a techno-political dispositif apt to enable the experimentation of the governance of a space and a community under the aegis of a post-workerist ethics. The desire is, indeed, to erode the space occupied in our lives by wage labour and related imageries, not only to work better but also to work less. “To ‘have time’ means to work less” (Dalla Costa 1971, 15) and, in effect, we need all this time to transform our imagery regarding work. Thus, the most interesting aspect of this experimentation connects to the practice about how to rethink value, an activity that leads Macao’s community to let emerge and remunerate that which is usually unrecognised: from taking care to relationships to the participation to governance processes. In this way, the spheres of leisure, inactivity and care become the places of social cooperation and the production of wealth, helping to overcome the quantitative model of valorisation towards a qualitative perspective: an “affect” economy, which develops around relational intensity and that assesses these processes before specific products (Massumi 2018).

Going back to the results of the inquiry on Santarcangelo Festival, there are two main aspects emerging. On the one hand, there is the issue of the scarse total funding that the Festival gathers each year from both public and private sources, if compared to the increased turnover within the city and surrounding territory and the impact of the program, a problem that triggers many other criticalities. On the other, there is a growing gap - real and perceived - between the citizenry of Santarcangelo and the annual event with its public and personnel.

We decide to focus on distance as an aspect to debunk and as a practice to re-establish a social cooperation able to face some of the problems connected to available funding: it is a necessary action, but it has to be grafted on wider processes of transformations related to cultural policies in Italy.

The idea is simple, we want to talk about the economy, feel it as a fact that belongs to us and that we are able to re-invent in environments ready to welcome communities living through them, while acting with a radical ethics of care as an existential condition of a political community (Jordan 2003, 268-274)

Therefore, we decide to contact those Santarcangelo residents who are busy with providing care to the body, and health more in general, in order to develop an intervention in the public space to keep this connection tight: the production of a circular economy by means of a local currency, SantaCoin, and the provision of services for the care and wellbeing of a diverse community, made of locals and the public from outside, which will cross Santarcangelo from the 5th to the 16th of July. Hair cuts, massages, tarot readings, tattoos, diet programs, postural exercises and much more will be at the centre of an installation in Santarcangelo’s main square, during the Festival weekends (7/8 and 13/14 July 2018)

The program is enriched by novel “rituals” of care thanks to the support of some 30 local professionals, while the circularity of the new “crypto” currency is enabled by the collaboration with Commonfare and its embedded financial circuit, Social Wallet, developed to “ensure economic sustainability, autonomy and free expansion of good practices of cooperative welfare” (Commonfare 2018).

Hence, Santarcangelo Festival becomes the ideal place to play the “money game” and the Crypto Rituals project its performative space for the production of the Commons.

With SantaCoin, in the form of a talisman carrying a QR code, it will be possible to access the Festival’s services - from show tickets to the cantine, from a manicure to a tarot reading.

What’s more, the local community involved in the project will be able, in turn, to spend the SantaCoins they received, creating further possibilities for exchange with the Festival.

Once the Festival will end this year, the enablers of the project will gather to understand together what to do with the surplus value that Crypto Rituals could produce. Perhaps, the decision will be to claim that “relaxing” should be an accessible practice and a common good, or maybe that the mayor of Santarcangelo should receive her salary in SantaCoin or still that something now unpredictable will in fact happen. What we are interested in is to stimulate people to imagine different economic and relational environments and to think about who they are and what they do within these environments.

The refusal of the economy based on scarcity cannot be anything else than a joyful collective “no” to a model in order to create another one, more liveable and contagious. 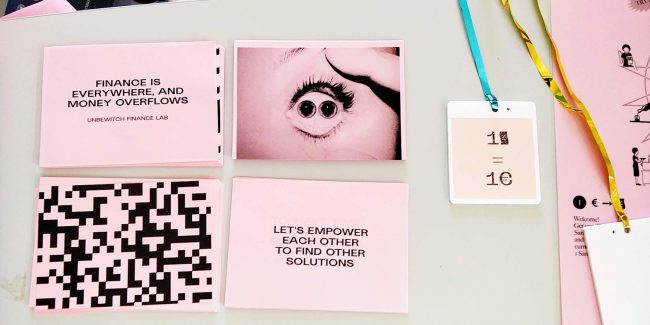 Dalla Costa, Mariarosa. 1971. Women and the Subversion of the Community.

Massumi, Brian. 2018. 99 Theses on the Revaluation of Value: A Postcapitalist Manifesto. Minneapolis: University of Minnesota Press.

Commonfare.net is for, with, and by people.

Do you want to join? You will need only an email address, and we will never use it for other purposes.

I fully embrace the philosophy that relaxation, rest and peace of mind, should be considered as common goods. I see "personal wellbeing" and "societal welfare" as strongly intertwined goals which we should collectively try to reach. Recognising this connection may help (I believe) to create a more equal society.

we fully agree with you, ADA! Besides, things such as peace of mind, pizza night and more time for personal wellbeing and leisure are among the needs and desires shared by research participants in Commonfare.

Commonfare.net is not linked to any external platform, so to share this Story on Facebook, Twitter, etc. you can copy the URL and paste it there.